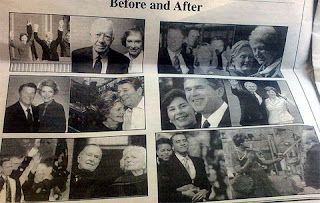 At least I don't live in Smithtown. That's something to be grateful for.
at 3:10 PM 2 comments 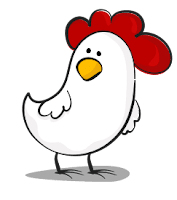 Let's see....Mr. Yenta spent one full week in the hospital. He had an MRI, EKG, ultra sound and probably some  other tests. His regular doctor called in a cardiologist and a neurologist. And now he says he needs a different ultra sound and at least one more specialist. The pharmacist is seeing a lot of us. Now I'm supposed to go for an x-ray of a problem area and pretty soon the doctor is going to notice that I'm late getting a mammogram. After checking with the very handy chicken converter it seems clear to me that if we didn't have insurance we'd have to buy the farm.
at 10:36 PM 1 comments

Image by Getty Images via Daylife
Why wasn't Hojatoleslam Kazem Sedighi invited to opine on the real cause of the attacks on 9/11/01 with Jerry Falwell and Pat Robertson. Where was he when blame was placed for Katrina? OK, I admit that I don't watch the 700 Club. Was he invited on? Maybe after the earthquake in Haiti? I'm just asking because he and Pat Robertson seem to have a lot in common. James Dobson would fit right in, too.


A senior Iranian cleric says women who wear immodest clothing and behave promiscuously are to blame for earthquakes.

Has a familiar ring, doesn't it?


"What can we do to avoid being buried under the rubble?" Sedighi asked during a prayer sermon Friday. "There is no other solution but to take refuge in religion and to adapt our lives to Islam's moral codes."

It wasn't you. It was me. I had a virus. More than one, actually. This one was the dreaded Google Redirect Virus or trojan or whatever the hell it really was. I also had something that was disabling my firewall. Not a good thing. Although it seems OK now I might still have it lurking in the system, ready to pounce on reboot. Actually, I've been very lax on security lately and I've had a few problems and used every kind of security software I'm familiar with and one or two that are new to me and other than Spybot Search and Destroy, which pretty much everyone has anyway, I'm not naming them until I know if we're really OK. Spybot's Tea Timer was what told me I had a problem to begin with, although it wasn't able to clean up the whole mess by itself.

What's kind of interesting, is how various browsers have reacted to the problems and maybe to the cures that have afflicted us in the last few days.

Google, Can We Talk?

Image via Wikipedia
Google, you know I love and respect you. I don't ever believe any of that "Google is evil" talk. Not really. I admire your competence and sheer genius in providing us with nifty user experiences. So it is with great anxiety that I have noticed that your search is getting spammed over. Make it stop! As recently as a few months ago you could put  just about anything you happened to be wondering about in your search box and get a load of relevent results. I can't tell you how many pressing - and not so pressing - questions I've gotten answers to that way. But lately what appear to be search results are leading to pages that are clearly just created, probably by means of their own complex algorithms (whatever they really are), to capture hapless searchers. Once again, Google, make it stop before something really terrible happens. Please don't make me use Bling.

Update - It was my fault, not yours, Google. More here.

Image by Getty Images via Daylife
It's tax day. Many protests are planned. Us - we're getting a refund for the first time since we had a dependent minor. That's more than a decade. Let's see what might have changed. Income - about the same. Maybe a teeny bit higher, but basically the same. Our deduction situation - exactly the same. So what could be different about 2009? Well, Barack Obama became president in 2009. Passed some tax relief for the middle class. I guess that must be the difference. Gee whiz, where can I go to protest that? On the way to the hospital, that is.

Has Everyone Gone to the Tea Party?

Image by Fibonacci Blue via Flickr
It's true that life is currently consumed with trips back and forth to the hospital and consulting with doctors and I have no idea what's happening in the world. That much is true, but there was still something that made me go "Hmmm"  I pretty much only travel the route to the hospital when we have someone there, but that's happened plenty in the last decade. I go past a Planned Parenthood office and there has always been one, two or three protesters outside with the usual signs. And now I've passed the place on Saturday, Sunday, Monday and Tuesday, every one of them featuring fine weather for protesting and there's no one. Nada. Not one angry soul hoping to harass some hapless female going in there for services - of which abortion is only one. Mentioning this  to someone who passes a different Planned Parenthood office on her route to work caused  her to realize she hasn't noticed anyone there lately either. So where'd they go? Nothing's changed recently and they were so dogged in the face of vast public indifference to their existence for so long. I can only conclude that they have probably taken up teabagging. The teabaggers have taken to setting up at local Post Offices, presumably to harass people who want to buy stamps, when there isn't a big event happening.

It does seem very  likely that the Tea Party draws from the same group of sadsacks of disontent who were around anyway, with time on their hands since their income so often derives from SSI.