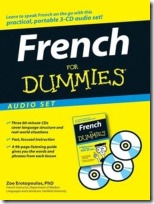 Lola came to the office for a couple of hours this morning. Everyone had to be out and we hadn't even had time to get a crate up. Not having any way of knowing if Lola has separation anxiety issues we figured better she spend the morning at work. My sister and I work at the same place, but she's in management and in meetings and running around putting out fires and all kinds of things, whereas I can usually be found in my office, so I took Lola. I learned that she gets really bored when you try to work on spreadsheets.

While she was keeping me from my actual work I got to wondering why such a well behaved, well socialized canine didn't seem to know the most basic commands apart from "No". Almost every adult dog I've ever met knows "Sit" and most of them have at least a passing familiarity with "Stay" even if they aren't really so good at it. Then it occured to me that Lola's from Brooklyn. There are a lot of different languages spoken in Brooklyn homes. Maybe English is not her first language.

A Google search produced a number of sites with lists of common dog commands in other languages. The first one I tried was TalkingTales.com. They list the same five basic commands in a whole bunch of languages.  I naturally tried Spanish first, since so many people speak it, but “Sientate” just produced the same blank look that “Sit” does. Next, figuring there’s a good sized Haitian population in Brooklyn, I tried French. “Assis”, I said firmly and….she sat. “Attend!” and she stayed. Say, “Ici” and she comes to you. So Lola is a French speaking dog. None of us speak French but we’re learning a little now, and we have to work on our pronunciation. She seems willing to put up with our atrocious accents for now and I do feel we’ve made a big step in communication.