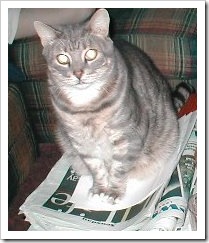 Today, we spent the afternoon taking Stevie Ray Cat to the vet. That’s Stevie in the photo, before he had a big icky thing hanging off his face. He’s the most senior of our three cats at just about thirteen.

He has a tumor that wasn’t supposed to be anything to worry about but it turned nasty, naturally, on Sunday morning. The good news is that there is a highly recommended animal hospital that’s open for appointments on Sunday. The bad news is that it’s at least a 45 minute drive away. He hasn’t needed anything more than routine care since he was a couple of years old, and he has a home visit vet for that. So, he doesn’t get out much.

Stevie is normally a very reserved fellow, so I hate having to have him poked and prodded, but he seemed to like the vet OK and was a perfect gentleman about the whole thing. No scratching, hissing or anything.  He just wanted us to stay very close in case anything went awry. They let us take him home tonight, but he’s scheduled for surgery in the morning.  He’s ready to go, I guess. He’s sleeping in the cat carrier right now. He loves it. I  suppose that means it’ll be part of the living room furnishings from now on. Of course, he doesn’t know that there’s one of those awful cones in his future. It’s going to be a difficult week or so all around.

I better make this an early night. We’re due at the animal hospital at 7 am. Which is at least 45 minutes away.

UPDATE: Stevie is home and purring like mad. We won’t know about the pathology for a couple of days, but right now he’s feeling OK.  He’s a little unsteady on his pins, but that didn’t keep him from having a bit of late supper and now he’s relaxing as close to Mr. Yenta as possible. He thanks everyone for their expressions of concern and we’ll let you know about the lab report when we get it.